A brief look back to the past. 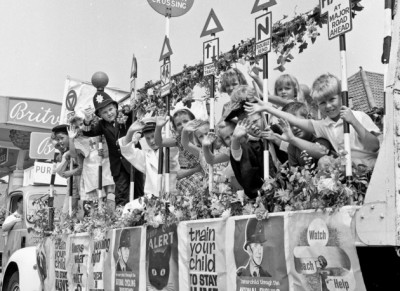 The General History of Carnival

The timing of the West Country Carnival close to the British celebration of Bonfire night (November 5th) is no coincidence, as the roots of the original carnival in Bridgwater date back to 1605.

Guy Fawkes is the character most associated with the plot to blow up the Houses of Parliament, however the instigator was Jesuit priest Robert Parsons from Nether Stowey, a short distance from Bridgwater. Parsons and his colleagues Edmund Campion and Ralph Emerson were Catholics, who wanted to put an end to the Protestant monarchy and parliament of the day, in order to put an end to Catholic persecution. In 1580, they were discovered attempting to garner favour with northern-English based nobility in the English Mission, and were then associated with the failed Spanish Armada of 1588, both plots to replace protestant Elizabeth I of England with catholic Mary Queen of Scots. After the deaths of Campion and Emerson, Parsons continued to plot to restore Catholic power in England, and hence his last ill-fated attempt against parliament and King James I on 5 November 1605. After the failure of the Gunpower Plot, Parsons was key in corresponding with Thomas Morton over the authority of use of St Paul in the creation and implementation of the Jacobean Oath of Allegiance.

Bonfire night is a major annual celebration across the whole of England, but it is likely that the reason that the West Country Carnival was originally so keenly celebrated is that the South West towns were predominantly Protestant – hence the celebration of Robert Parsons’ (and Guy Fawkes’) failure. The religious origins of the event are almost forgotten and far less significant today.

Burnham Summer Carnivals appears to have been started somewhere between 1908 - 1920. (as 1948 was the 28th Carnival) so allowing for WW1 & WWII would be between these 2 years. They took place on August Bank Holiday Monday each year and was a day time Carnival. The Carnival was run to raise funds for the Burnham War Memorial Hospital and other Local Charities. The oldest 2 Cups still left today date back to 1931, (The Ben Travers Challenge Cup and the Wiley Challenge Cup), (see also Cups and Trophies).

1948 Wincanton Silver Prize Band at 2pm led the Procession around the Route and afterwards played music in the Manor Gardens from 4pm -5pm and 7pm -8.30pm . Burnham and Highbridge Town Band played from 5.30pm – 6.30pm and 9pm – 10pm. The Manor Gardens also had a Licensed Bar that served Holt’s Fine Ales from our Local Holt’s Brewery (Between Police Station and Lighthouse Inn) and it was run by Joe Nolan Landlord of the Royal Clarence Hotel.
The day also saw “The Magic Circle” outside the Pavilion from 10am, this was a Copper Trail, where you could put your Pennies and watch it turn into the “Magic Circle”. There was a “Balloon Race” at the Manor Gardens where you could Purchase a Balloon for 6d (2 1/2p), the Balloon has filled with “Hydrogen” and an address label attached and who’s ever went the furthest won the prize of £1.1Shilling (£1-05).
Other side shows included, Housey Housey (Bingo), Darts, Shoot the Penny, Speed Wheel, Target for tonight, Hoopla, Have-a-go, Coconut Shies, Cover Cigarettes, Touchems, Kan Kan, Wheel of Fortune, Quoits, Treasurer Hunt, Hare and Tortoise, Cork Shooter, Can you Drive, Fishing for Champagne, Football, Ring a Bottle, Ball in the Bottle and Penny on the Drum and Skittles.
Pets Corner under the Supervision of Mr Ronald Parsons was also a firm favourite, admission was Adult 1/- (5p) Children 6d (2 1/2p) and opened at 2pm.
Joyce Bowden of Berrow was the Carnival Queen and she and her attendants headed the Grand Procession. Then handed out the Prizes afterwards in the Manor Gardens at 3-30pm.
The England Mascot Kenneth H. H. Bailey from Bournemouth also entered as “Tory Vermin” or “Palestine Partition”, he was a regular at the Winter Carnivals as well, right up to around 1980.

Route in 1948 This may not be the Original Route but in 1948 the Procession lined up in St Andrews Road at 1-15pm and the Procession Started at 2pm and went Via Manor Road, turn left into Victoria Street, down the High Street, turned Right into Pier Street then Right again along the Esplanade, Right down Sea View Road, Right again and ending back at the Manor Gardens.

Children’s Procession In those days the Children had their own Carnival Procession, but it lined up at the same time and place and took exactly the same route, following immediately after the Grand Procession.

1968 Joined with Highbridge to start the Carnivals we know today. 1977 The Queens Silver Jubilee. (One off Summer Carnival)

In 1945 when WWII came to an end it was decided to hold a Carnival by the “Welcome Home Fund” The First Carnival was not only a parade but had a Large Bonfire in a field by the Coopers Arms and Squibbing (Fireworks) Display in the Town Square. (These were “Home Made Squibs”). The Bonfire was made up of thousands of cartons and cartridge cases.

Original Route The entries originally lined up on the Huntspill Road, by the Artillery Arms. The route went along Church Street turning left into Burnham Road, Right into Old Burnham Road then doubling back into Church Street, down Market Street and finishing at the Coopers Arms.

2nd Route A few years later it stilled lined up on the Huntspill Road. The route then went down Church Street, turned left into Burnham Rd, and then Left into North Ave, (20 Min Break to allow traffic to clear) then back along Burnham Rd to Church Street and Market Street.

In the early years the Entries were light by Torch Light. In the first Procession was a well known Car an 1896 two cylinder Daimler (Fiery Liz) Reg No Y99 owned by a Burnham Man. American Soldiers were surprised to see it and took Photo’s to send back to USA.

In the beginning a Variety Concert was held with Local Artists help raise more money to give to Charities. As this has always been the main purpose of Carnivals.

In 1950 some crockery was bought to enable a Sub Committee of ladies to cater at dances and other events.

1953 In January Phil and Irene Harris, Daughter Pam and Husband Dave Reed joined the Highbridge Committee and helped to organise a Coronation Day Ball. Which was very successful.

1954 A series of Dances were held in 14 different Towns and Villages, which were Bleadon, Mark, Watchfield, West Huntspill, East Huntspill, Woolavington, Puriton, Pawlett, Bason Bridge, Brent Knoll, East Brent, Burtle, Burnham and Highbridge to find a Carnival Queen. 14 young ladies were chosen, One Lady was from each place and they then became Miss (wherever they came from). They would then be in the Grand Final held at Highbridge Town Hall where the Queen and 2 Princesses would be chosen the other 11 would be Attendants. Later years Berrow & Bidisham were added and Bleadon dropped as it was for all Towns and Villages within a 5 Mile radius. (Local)

The men of the Committee Constructed a permanent Carnival Queen Cart. It had a Throne, 2 Seats at the top and an oval seat on which sat the other Girls. There was 2 Electric Fires mounted on the cart to keep them warm. To help keep them warm they had polythene wrapped around their legs, under their long dresses, and Hot water bottles on their laps. As in those days they did not have the light bulbs to keep them warm.

1958 No Carnival was held this year because of reconstruction work being done on the River Brue Bridge and Bristol Road Bridge. No doubt being finished in time for the Queens visit less than a month later on 5th Dec 1958.

1959 Weetabix and John Player were entered into the Trade Class. Also the Electric Board gave permission for the sodium Street Lightong to be turned off during the Carnival.

1960 January. The County Carnival Ball was held in Highbridge for the first time But in August that year there were rumours that Highbridge Carnival was about to fold. In October a Skittles event took place the prizes were a Lamb Carcass and a Basket of Fruit. The Carnival Collection in Nov was down to £71.13 Shillings (£71.65). The Burnham and Highbridge District Council asked for a Donation towards Furniture for the newly created “Southwell House” in “Southwell Gardens”. Which they did, this was the last Carnival held solely in Highbridge.

1961 January 23rd. At the AGM it was stated by the Treasurer that a serious loss had been taken in the previous year of £181. He said they would need £300 in the bank before another Carnival could take place. So a Special Meeting was held on 20th Feb 1961 where it was decided that due to the Lack of interest in the Town of Highbridge (as most of the Committee by then were from outside the Town) and a few Committee Members resigned, That the Committee did not have enough Members left to function properly, so the President, Chairman and Secretary were made Trustee, it was then with deep regret Highbridge Carnival Folded.

The First Joint Highbridge and Burnham-On-Sea Guy Fawkes Winter Carnival took place in 1967 and has carried on to the present day.

This page is a working document, if you can help us fill in any of the blanks please get in touch.